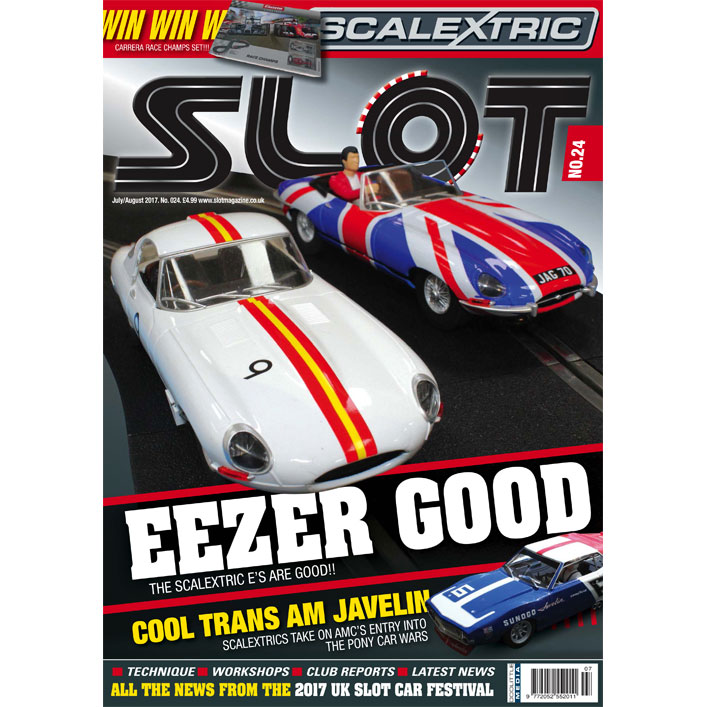 Latest issue of Slot is on sale in WHSmiths and other good newsagents, also from Pendle Slot Racing. Here’s a look at what’s inside:

4 NEWS & NEW PRODUCTS
What is happening in the
SLOT magazine world. News,
announcements, and interesting slot
gossip. Plus see the new cars that
are in the shops since the last issue
of SLOT magazine. We look at brand
new models coming your way
64 SLOT CALENDAR
If you want to race or have a look
around a Swapmeet, there is probably
an event you won’t want to miss.
Send your event details if you want to
be included
65 SLOT DIRECTORY
Find the retailers and specialist
services you need for all your slot
racing shopping
66 PASSING SHOT
We observe how popular the working
tracks were at this years Slot Festival
46 COMPETITION
Get the chance to win a Carrera Set
14 SLOTFEST
If anyone thought that interest in slot
cars in the UK had waned, they would
not have thought so visiting this year’s
successful event – again held at the
British Motor Museum in Gaydon over
the weekend of the 13 – 14 of May
24 THE RE-BIRTH OF A LEGEND
With Scalextric announcing that they
are to produce the convertible E
Type Jaguar for 2017 let’s look at its
development and previous releases of
this 1960s icon
32 THE SCALEX E’S ARE GOOD!!!
Shortly after compiling our E-Type
feature we were surprised, but also
very pleased, that the prototypes of
Scalextric proposed new model of the
E-Type appeared on the Scalextric
stand at the UK Slot Festival
34 SHAKEN AND STIRRED
007 Goes Slot Racing
40 BEING KITTED OUT IN
THE LATE 60S
Riko’s great value home track racers
46 IN THE SPIRIT OF GOODWOOD
Chris Turners 60s flavoured
home track
50 JAVELIN
Over the last few years slot car
companies have been turning out
more and more of the cars featured
in the North American based series in
which domestic built cars dominated
during the period of 1968 to 1972.
Here is the story surrounding the
smallest of the big four US motor
manufacturer’s entry into this popular
series and how it got replicated as a
1:32nd scale ready to run model
56 BUILD-UP
Early buildings and accessories from
Havant – Almost from the company’s
inception Scalextric saw the value in
offering its customers a collection of
buildings and accessories. Here we
look at some of the often-desirable
pieces available during the early
1960s
10 VOLKSWAGEN’S ICONIC TYPE 2
THE VAN THAT CAN
Scalextric’s 2017 range ‘Hippie’
cartoon livery for the Volkswagen
T2 Camper Van C3891 is expected
to arrive shortly, VW van obsessed
Hornby Hobbies Researcher, Paul
Isles, gives us the lowdown on this
true ‘van for the people’